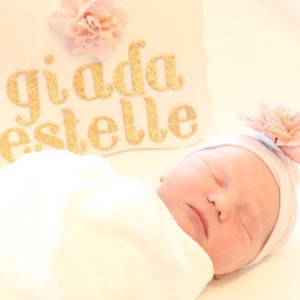 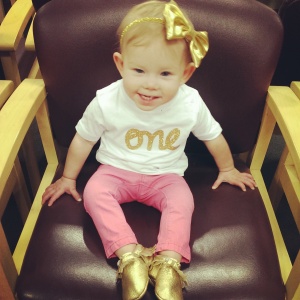 ….and just like that I have a one year old.  I can’t even begin to describe how quickly Giada’s first year of life flew by.  Maybe it’s because we juggled two under two at first and those first few months were a whirlwind in itself,  but for real this week she woke up as a one year old!   It’s almost as if she knew she turned 1, because she is acting SO independent lately.

I don’t even know how an entire year has possibly gone by.  I can still remember June 5, 2013 like it was yesterday. I honestly don’t think I slept at all the night before.  I kept going in her room, touching her clothes, adding more hair bows & clothes to my hospital bag, all the time wondering if I REALLY was having a baby girl.  I just couldn’t believe it until I met her.

Giada has truly completeted our family in ways I never knew possible.  She’s been so easy going, good natured, and laid back that it made it pretty easy transitioning from 1 to 2 kids.

A few fun facts about Giada’s first year of life:

– She started sleeping all night in her crib at 7 weeks.  This was huge for us as since Ari didn’t go into his crib until close to 8 months and boy was that a rough transition.

– Since I probably took 5,628,565 pictures of her one of her first words was “cheeeeeese”.  For real, it’s the cutest thing ever hearing her say it.

-Giada just ADORES her brother.  If there was ever a case for why you should give your child a sibling, its these two.  Watching their relationship evolve this year has probably been the most rewarding part of 2 under 2 for me. 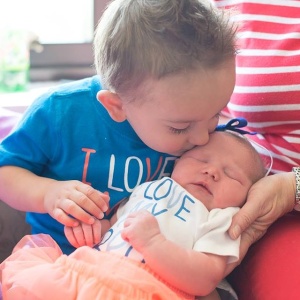 -She was hospitalized at 3 months old for an unexplained fever.  Not only did they run a million tests on her, but we also stayed at the hospital for 2 nights.  Little lady was hooked up to an IV, several monitors, and needed her vitals checked every hour, but handled it better than I did.  Little lady was a trooper.

– Mommy has a shopping problem so Giada’s shoe collection can probably top a family of four’s!  Whenever I don’t see her for a few minutes I check her room and most often she’s sitting inside her closet playing with her shoes.  I think it’s a sign. We have a mini Carrie Bradshaw on our hands.

-Although Giada was born an ounce shy of 9lbs (8lbs/15oz) AND can put away more pizza than her big bro, she still hasn’t broke 20 lbs yet! I don’t know where she puts it all!?!?

Yes she is my real life doll and I cannot believe how lucky I am to have her.  Thanks to Kathy Davies Photography for the amazing pictures of our princess.